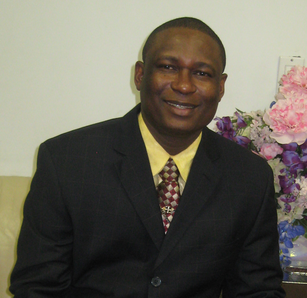 Rev. Dr. Richard Wesley Clarke is a native of Liberia, West Africa, where he served as pastor in the Liberia Conference for over twelve years and as Presiding Elder for four years. He holds a bachelor’s degree in Theology from the Bryant Theological Seminary of the African Methodist Episcopal University in Liberia, West Africa, graduating with high academic honors.

Dr. Clarke is a humble man of God and  a man with vision.  Over the last year, we have witnessed our growth spiritually, through the birth of new ministries and increased participation in our Bible Studies.  His leadership focuses on five main issues—Reaching and Reclaiming the Community, Educating and Empowering the community, Practicing Godly Economics, Expanding the Ministry and Building our Bethel.  Dr. Clarke has instituted a Men’s Ministry, Women’s Ministry, Senior Ministry, Prayer Circle and reorganization of Class Leaders.  He also formed an Exploratory Commission for the Educational Center and the Commission for the Revitalization of Bethel for the next Decade.  Under his Administration, the Morning Inspiration Choir and Philippian Ministry were organized, a new digital sign was purchased, installation of a new gas heating system in the parsonage, replaced the deteriorated roof on the Educational Building, repaired the church steeple tower and renovated Dana Hall.

Dr. Clarke is married to Mebby Lukwesa Clarke and the proud father of two daughters—Rachel and Ruth.  A man of God, Dr. Clarke comes as a servant open to sharing the work of ministry.